It takes a lot to be roused from hibernation in the blogosphere, especially in May, when it seems like the Christmas season is so far away.  We're not even at the half-way point, where I wish everyone a hearty "Merry Half-Christmas!" and they give me a look that says "That is one with-it, hip dude".

But, stirred from the slumber we are, and for good reason: an unearthed treasure from tympani virtuoso Mrs. Helen Marf.  Faithful readers will recall my review of "Having a Marfy Christmas!!!", an unexpected gem of a holiday album released in the 2018 Christmas season.   Quilt Records, the lucky-as-heck label for Mrs. Helen Marf's recorded output, has done it again, resurrecting the 1974 tympani-electronica classic "Canzoni di pazzia e morte", which I'm pretty sure means "Death by pizza stuffed cannoli". 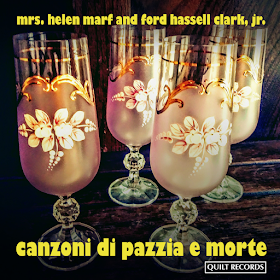 "Canzoni di pazzia e morte" is a match made in sonic heaven, as Mrs. Helen Marf is joined by Ford Hassell Clark, Jr, an electronic music experimenter, or should we say experimentor, as his techniques and methods are surely sought-after even to this day as the de facto pinnacles of studio mischief.  Much as Les Paul would drape a cloth over his guitar neck to hide his innovative playing techniques, it's rumored that Mr. Clark, Jr would literally surround himself with drapes in the studio to discourage 'dem music spies'.

The album opens with "La canzone della fatica" revving up with funky synthesizer and quickly joined by Mrs. Helen Marf's driving, relentless tympani.  Intense pauses separate the three movements of "La canzone...", each painting a unique aural picture.  The final movement, clocking in at a brief 23 seconds, hearkens a mental image of a Japanese Tea Garden (if indeed such a thing exists).

"Tarantella No. 5", which I'm pretty sure means "The Fifth Tarantula", evokes images of a hungry yet groovy spider stalking his prey, in this case an annoying chirping little bird.  At around 1:20 the tension sets in, Mrs. Helen Marf's tympani speeds ahead, and the chase is on!  Will our hero the tarantula catch the songbird?  No spoilers here my friends!

"Canto allo rovescia" is an exercise in mono-tone rhythm surrounded by an envelope of synthetic sound.  Mrs. Helen Marf plays a single kettle drum tuned to a single note.  The control and precision of the k-drum are in stark contrast to the swarming electro-sounds surrounding the core.  It's as if Neils Bohr's atomic model were set to music - Hassell Clark's electron field in sonic orbit around Mrs. Helen Marf's percussive nucleus.

Track 9, "Ciabatta infradito", which I'm pretty sure means "Little Red Hot Bread", is a showcase of Mrs. Helen Marf's mastery of the triplet.  "Ow! Ow! Ow! Ow! Ow! Ow!" the tympani seems to say, as if the little bread is just too hot to hold. 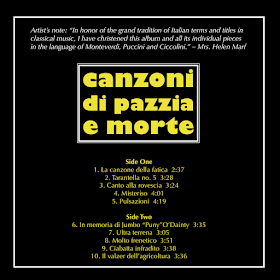 A very special track is "In memoria di Jumbo "Puny" O'Dainty", track six.  A melodic tympani rhythm frames and accents clips from a piano recording by Mr. O'Dainty, rescued from an 1959 acetate recording and presented here with help from Clark, Jr.  Mr. O'Dainty was also a Quilt Records recording star, and dear friend of Mrs. Helen Marf.  Her love for "Puny" comes through in spades.  Mrs. Helen Marf has never pounded the tympani better then on this fortissimo ode to friendship.

Now, let's talk about "Misterioso", the enigmatic track 4.  Der Bingle believes he is on to something here.  "Misterioso" is eerie and spectral.  It's four minutes and one second of a ride through an old-timey funhouse, the kind with creepy clowns, shadows, mildew, and flickering 15-watt lightbulbs.  The extensive liner notes for "Canzoni di pazzia e morte" admit that "Misterioso" was played on a loop for "Earthquake McGoon's Brain Rattler", a ride at Dogpatch U.S.A.  Now, although I can't confirm that the Brain Rattler was an old decrepit funhouse, "Misterioso" has the signature sound of an aging theme park haunted house ride.  So here's where it gets interesting...  In 1971 the absolute classic album of the haunted house circuit was released, "Black Mass" by 'Lucifer'.  Released on the UNI label, it contained tracks titled "The Rise of Aida (Voodoo)", "Incubus", "Exorcism", and the title track "Black Mass", among others.  (Reportedly) recorded by Canadian synth-innovator "Mort Garson" (as if that's a real name), "Black Mass" was a one and done explosive cornucopia of weird, spooky electronica that became an underground classic, and a rare collectible album.  Seems oddly coincidental that electronic music maestro Ford Hassell Clark, Jr re-emerged in 1974 to duet with Mrs. Helen Marf only three years after so-called 'Mort Garson' exploded the scene with "Black Mass" and then promptly disappeared.  Quite suspicious, in my book.

Suspicious is as suspicious does.  Once you've grooved to "Canzoni di pazzia e morte", give a comparative listen to "Black Mass", here at the internet archive.  Judge for yourself.

"Canzoni di pazzia e morte" is ten tracks of tympanotronic brilliance.  Mrs. Helen Marf, Ford Hassell Clark, Jr, the ghost of Jumbo "Puny" O'Dainty, and guest musician Fletcher Munson were brought together by Executive Producer Clancy Snarrup for Quilt Records, and we all can be glad that he did.  Y'know, they just don't make music like this anymore...

Is your appetite whetted?  Has the Mrs. Marf groovy bug bit ya?  Or are you saying "Der Bingle, gimme more!"?  Say no more squire - here's a video preview for "Canzoni di pazzia e morte":


"Canzoni di pazzia e morte" is being released on May 10, 2019.  You can preview it, and other selections from Mrs. Helen Marf and the Quilt Records catalog at Bandcamp.

An unconfirmed rumor is that Kansas City musician Jason Beers has some connection to this album...

A pre-release copy of the album was provided to Merry & Bright! by the artist for review.
Der Bingle at 5:18 AM 1 comment:
Share
‹
›
Home
View web version