Album Review: "You Really Meant It" by Jillaine


I have about 300 jazz CDs in my collection, which is paltry when compared to many jazz music lovers, but still a pretty decent accumulation of music.  Probably between 75 and 100 are primarily jazz vocals, a minority of my collection, but a good representation of jazz vocalists through the years.

In my collection, I have nothing that compares to Jillaine. 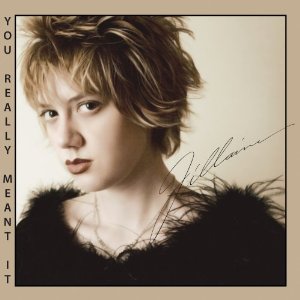 Jillaine is an independent vocal artist possessing a powerful, steamy, sultry voice that leaps out at you from the first few bars of her debut album, the 2009 release "You Really Meant It".  She does not have a sound similar to the greats - Ella Fitzgerald, Sarah Vaugh, Billie Holliday - nor the contemporary stars of jazz like Roberta Gambarini, Sophie Milman, or Jane Monheit.  Jillaine has a voice and style all her own, and it's good stuff, cats, good stuff.

Jillaine's "You Really Meant It" features nine songs, four written by Jillaine.  The first song, "Older, Stronger, and Wiser, Too" is an exceptional lead track which quickly envelopes us with the heart and soul of Jillaine's voice.   The record continues with "You've Got Your Memories", a gut-wrenching breakup song with excellent guitar accompaniment by Sam Jones.

The songs on "You Really Meant It" are steeped in the musicality of jazz standards.  You feel as if you're in a piano lounge, sipping a martini, listening to a masterful vocalist with piano and guitar acting as enhancers, complementing and never overshadowing the vocals.

All nine songs on "You Really Meant It" are strong.  Jillaine's partner musicians have just the right touch.  I especially enjoyed the two songs written and accompanied by Anthony Phan, "Love Without Distance" and "Misfortune".

"Misfortune", the closing piece, is full of swagger, and, like most of the songs on this record, explores the darker aspects of life and relationships (or, recently ended relationships).  Jillaine's voice is uniquely suited to driving home the emotion present in the lyrics.

I love finding music from independent artists, especially those with the talent and potential to be stars.  The internet has given these artists an unprecedented method of connecting with fans, and, conversely, has made it possible for fans and music lovers to interact with artists as never before.  Jillaine has a website, http://www.jillainerecords.com/index.html, a Facebook presence, https://www.facebook.com/JillaineRecords, and other web-based avenues to her music.

It was through the internet, via my friend Stubby at Stubby's House of Christmas, that I was first introduced to Jillaine's music.  (Stubby's review of Jillaine's 2011 Christmas CD is here).  Many kudos and thanks to Stubby for his tireless work to find all the best new Christmas music year-in and year-out.  Without Stubby, I may have never found Jillaine's music.

"You Really Meant It" is a tremendous debut from a promising new artist.  I love Jillaine's voice, seriously.

I have not listened to her Christmas CD yet, as I'm saving it as a treat to open when the season arrives (which for me, is about mid-September).  And I have no doubt that it will indeed be a treat for my ears.
Please treat yourself and visit Jillaine's website for more information and song samples from this tremendous jazz singer.
Der Bingle at 6:16 PM
Share