On the surface, "Descent" by Tim Johnston (Algonquin Books of Chapel Hill) is a mystery/thriller novel.  Set in the central Colorado Rocky Mountains, "Descent" tells the story of the abduction of Caitlin Courtland, an 18-year old out for a run in the mountains with her younger brother Sean, while marriage-reconciling parents Grant and Angela remain in their vacation cabin.  Sean is struck and injured by a driver of a modified sport utility vehicle, causing Caitlin to face the choice of staying with her brother or riding with the stranger down the mountain to where her cell phone will regain service.  Caitlin ultimately chooses to ride, and then becomes imprisoned by the driver.  Her family then must endure the ordeal of a lost child and sibling, as they spend months and years in a futile search. 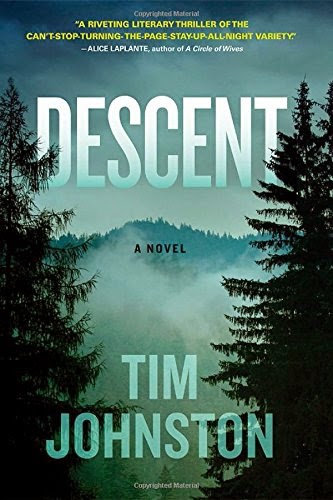 "Descent" is much more than a typical mystery.  Guilt abounds through the Courtland family, each feeling that Caitlin's abduction and disappearance is somehow their own fault.  Author Johnston wraps the reader into the guilt with an intense subtlety.  Through the actions of Grant, Angela, and especially Sean, we feel their guilt rather than being told about it.  Sean is referred to as "the boy", telling us about his self-image, never allowing himself to truly grow from his 15 year old self.  Grant never leaves Colorado, even long after the official searches have ended, staying with the father of the local sheriff, Joe.  Joe's brother Billy, a black sheep character, is a conflict for the Courtlands.  Billy has run-ins with both Grant and Sean, and is a "bad man", described by Grant in a particularly tense standoff.

Mr. Johnston's skill at bringing depth to "Descent" is very admirable.  At times the cost of the depth is a story that moves at a deliberate pace,but it is well worth it.  When the story picks up the pace, you will not want to put the book down.

Many mystery stories have a point of plot convenience, where the reader must suspend disbelief momentarily and go along with an unlikely event that is there to progress the story.  There is a slight moment like this in "Descent", but Mr. Johnston addresses this with great skill.  The story flows amazingly from that point forward, and any "Oh, really?" thoughts a reader may have are quickly erased.

"Descent" is a fine, gripping, and involved novel, and an excellent choice for a Wintertime read