So, back in early March, before the world shut down, I traveled to Florida to attend my daughter's national dance competition in Orlando.  We left on March 4, returned home on March 9, and then everything closed.  Had the competition been a week later it would not have been at all.  Apart from the cobbled-together (although very well done) graduation-related events, that competition was the last hurrah for my daughter's Senior year in high school.

Since I don't get to Florida often, I had been planning to meet Ernie of Ernie (Not Bert) fame, well known to (nearly, I'm sure) all the regular readers of this blog.  Ernie drove to Orlando from his side of Florida, and off we went in search of Christmas music treasures to unearth.  Der Bingle and Ernie, together, scouring the crates.  The Christmas music force was strong in central Florida that day.

First item on the agenda was lunch.  We found an empanada place near a giant thrift store, so went in there for some food.  The cafe workers spoke Spanish, Ernie and I did not.  But through pointing and a mutual understanding of "beef" and "cheese" we each got a delicious plate of empanada-type cuisine.

Then it was off to the crates.  We hit up, if I recall right, three thrift stores and three record stores that day.  The record store folks were all wonderful.  They may have looked at us a bit quizzically when we said we were after Christmas music, but they all accommodated.  One in particular, Retro Records, hauled out multiple crates full of Christmas albums and CDs for us.  Ernie and I each scored a few great additions for our collections there and in the other stores.  I held back a bit, knowing that I had to haul them all back in my luggage, but still came away with some great stuff. 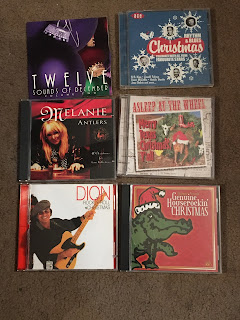 I've (of course) listened to all the CDs.  "Antlers" by Melanie is the best of the lot - a really good Christmas record.  Dion's is pretty solid, too.  Really, all are good, though the "Twelve Songs of December" is a promotional mix with just a couple Christmas songs on it.  Was only a buck though, so, ya know.... 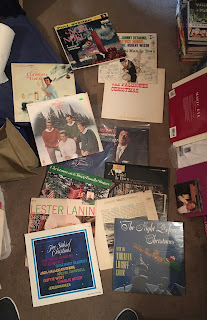 And, just a few vinyl records, too, some as a "Welcome to Florida" gift from Ernie the Man himself.  If you look closely you'll see vinyl Christmas favorites Lester Lanin, Williams Brothers, Norman Luboff, and Giselle.  There's an album from Lou Monte,  Christmas in Zitherland, the Trapp Family Singers, and the Trappist Monks of Gethsemene.  A good haul, natch.

At the end of the day Ernie dropped me off at Animal Kingdom Lodge where I met up with my wife and we feasted for an hour at Boma, the best buffet in the world.

I hope that someday I can return the favor to Ernie and show him around Kansas City and hit up the local record stores.

In some ways, because we were all quarantined with shelter-in-place orders only a few days later, this trip seems so very long ago.  But as Christmas music season approaches (well, it never really goes away) and I throw these records on the turntable, I've got some great memories to go along with the music.