Laurie Berkner makes happy music.  Really happy, spirited, high-energy, playful, joyful music.  Laurie and her band, The Laurie Berkner Band, have been making music for kids for many years.  If you google "best children's music" or "best kids music artists" or anything similar, Laurie Berkner will undoubtedly be at or near the top of the search results.  Although she is described as a children's music artist, what sets Laurie apart from so many other musicians focusing on kids music is that her music appeals to all listeners, regardless of age.  It's good music, pure and simple. 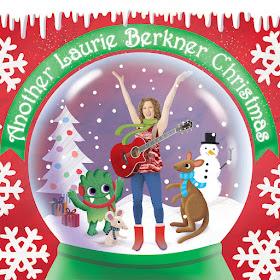 Laurie has released a new album of Christmas music, titled "Another Laurie Berkner Christmas", following by 10 years her first album of seasonal songs.  Laurie and her amazing band - Susie Lampert, Brady Rymer, and Bobby Golden - will make your holidays even more special with 18 songs full of cheer, goodness, and smiles. 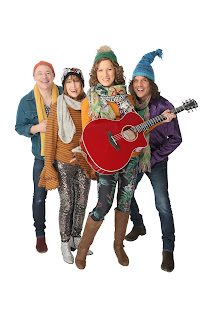 Laurie brought in some special guests for "Another Laurie Berkner Christmas".  Suzzy Roche and Lucy Wainwright Roche join her on "Here We Come A-Wassailing", and Norm Lewis lends a magnificent voice to "Good King Wenceslas".
Laurie was kind enough to answer a few questions for Merry & Bright about her new album, making great music, and some of her favorite Christmas traditions.
Please be sure to visit Laurie on all of her internet and social media sites!  Links follow the interview.

Laurie Berkner: Thanks for having me!

LB: I thought 10 years was a good amount of time between albums - and it felt like I had the energy and inspiration to record new Christmas songs that would make me as happy as the first ones did!

MB: You chose 13 classic Christmas songs to go alongside your five originals. How did you choose which of the standards to arrange and record?

LB: Having already recorded 12 standards on my first album, I had to start by finding songs that were as meaningful to me as those had been. I tried to choose songs that were both part of my childhood memories and that I thought would appeal to kids and families now. Mostly I wanted to record songs that brought up a lot of feelings when I was young.

MB: Laurie, you and your band make great music. Not just great children’s music, but music that is enjoyed by everyone, no matter how young or old. What’s your secret to making music that is focused on young listeners but is also a treat for moms and dads and grandmas and grandpas?

LB: Thank you! I love hearing that. I think a lot about how to create music for kids first, but without leaving out the adult listeners. Especially because I often have to sing those songs over and over again once I've written them! I don't know what the secret is, exactly, but I do know that I try to make music that I like. I also include interaction, lots of images, and playfulness for the kids, while keeping the music and rhythm interesting on an adult level.

MB: You have some amazing guest artists on “Here We Come A-Wassailing” – Suzzy Roche and Lucy Wainwright Roche. I’m a huge fan of The Roche’s Christmas album “We Three Kings”, and so I was very excited when I saw that Suzzy Roche and daughter Lucy would be contributing to your album. Can you tell us how this collaboration came about?

LB: Oh my goodness, I was so excited, too! I have been a huge Roches fan since I was in my 20s and I was thrilled that they agreed to sing on the album with me. The idea came about when I started to consider recording the Hallelujah Chorus for this album. We played with the idea of my doing it entirely a cappella and I remembered having seen the Roches perform it that way in concert back in the ‘90s. I mentioned this to my sound engineer, Dave Darlington, and it turned out that he is good friends with Suzzy's husband! I knew that the Roches were no longer together and that Suzzy was touring with her very talented daughter, Lucy Wainwright Roche, and asked him to reach out and see if they would both be willing to sing a song with me on Another Laurie Berkner Christmas. I chose “Here We Come A-Wassailing” because I thought it would be an ideal song to showcase their beautiful voices.
MB: And speaking of guest singers – Norm Lewis. Man! What a performance on “Good King Wenceslas” – such a regal voice! Can you share the story of bringing Norm on board and the recording of “Good King Wenceslas”?

LB: Another lucky connection! I knew of Norm and what an amazing singer he is, and he also happened to be a good friend of someone who works for me. She thought of him when I mentioned I was looking for someone to sing the part of the "King" in "Good King Wenceslas." I reached out to his agent and was thrilled when he said yes!

MB: We all love the old chestnuts, the Christmas songs that we’ve grown up with. But your originals are fantastic, and really represent the soul of the record. I absolutely love “I Live Inside a Snowglobe (Shake It Up)”, and can imagine a room full of kids shaking it up, stomping, jumping, and roaring! (Actually, I can imagine my college daughter and her roommates doing the same thing). Can you tell us about creating this song?

LB: Hahaha, that's so fun to imagine!! And thank you, I am really happy with the originals on this album, so it's great to hear that they shine through all of the traditional songs. Someone who works for me (Michelle) suggested that I write a song about living inside a snowglobe and I thought it was a great idea. The first thing that came to mind was that if I did, I would want to shake it from the inside and that the movement of shaking would be fun for kids who heard the song. I went with that image and the rest of the song followed.

MB: Another original is “Time To Eat”. It is seriously fun, and really involves the kids in the song. Like “Snowglobe”, I can imagine kids in a classroom really engaging and shouting out their favorite holiday dinner foods. What is the story of “Time To Eat”?

LB: That's exactly what I imagined as well! I wanted to write a song about people gathering in a home to celebrate and eat a meal together, and actually hoped it could be used at any time of year. I also wanted it to be easy for kids and families to change the song to be about whatever foods THEY enjoy and cook for their gatherings. Then I actually did that myself for recording! I originally wrote “Time To Eat” for my 2021 album, Let's Go!, and decided to change some of the food to make it feel more like a more winter holiday song for Another Laurie Berkner Christmas. I also wanted the song to be catchy and easy to remember enough that it could be sung easily while families are cooking or preparing for everyone to arrive.

MB: Every song on this album makes me happy and brings a smile to my face. When you and your band are performing live for an audience of kiddos, what is the energy like? What’s the concert experience like for you and your band?

LB: Oh wow, that really makes me feel good, thank you. The energy when we perform is so exuberant and joyous. It's really one of my favorite things to do and I feel so lucky to be able to do it! I create the set list for every show to support an ongoing interactive experience with the audience. We're always inviting them to take part in the song in some way whether it's singing, clapping, hand motions, or using their whole bodies through movements like jumping or dancing. I do the song "Pig On Her Head" at pretty much every show I perform, and the kids bring stuffed animals to wear on their heads that I sing about. It's playful, it's loving, it's musical, it's active, and hopefully, it's also moving. I know the band and I certainly feel that way about every show - and we hope the audience does too.

MB: Laurie, what is one of your favorite Christmas family traditions?

And picking out the tree.

And just being together with my family on Christmas morning.

Wait - did you ask for just one?

MB: Laurie, thank you again for answering a few questions for Merry & Bright. I wish you all the best! Merry Christmas to you, your band, and your family!