It's October 9th, cool and rainy (yeah - we've had seven inches or more or rain at my house this October), and the holiday season is gearing up.  It's time for a post full of random thoughts.

-  Tomorrow night at the Kansas International Film Festival I'm going to see "Jingle Bell Rocks!".  I've been looking forward to this ever since it was announced as a selected film.  Greg of Greg's Swank Pad Lounge and I are going to the screening and hope to meet up with director Mitchell while we're there.

- Lots of new Christmas music coming out this season, as diligently cataloged at Stubby's place, but this year there are just a few that I'm excited about. Elizabeth Chan's new release, "Christmas in the City" tops my list.  Idina Menzel's "Holiday Wishes" is also way up there.  After that, it's a lot of re-releases (The Williams Brothers, Frank DeVol), and indie artists (Kat Tingey, Road 23).  I'm sure I'll add several new albums to the collection, but overall this year's new releases seem a little underwhelming.

- This season at Merry and Bright! - another CD giveaway contest!  I have a couple promotional CDs from an artist, so I'll be doing another fun little contest.  Stay tuned...

- Gotta get busy to provide at least a few album shares this season.  I have a few ready to rip down in the Merry and Bright studio (aka the room downstairs aka The Elvis Room).

- And, a random thought to close - this week marked the closing of The Maelstrom ride at Epcot in Walt Disney World.  On our family's last two trips to WDW, we must have ridden the Maelstrom 15 times.  We really loved it - not for a thrill ride, but really as a perfectly executed little ride full of character.  Although it will be immensely popular when it reopens as a "Frozen" theme ride, it won't have the same charm as The Maelstrom. 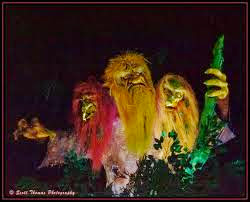