On one of my visits to Kickstarter, I found a project called "New Jewish Love Songs" by Hannah Spiro.  I had not heard of Hannah, I had no Jewish music in my personal music library (except for a handful of Hannukah songs), and I didn't know what Jewish Love Songs were.  Honestly folks, I grew up in South Central Kansas, I didn't meet my first Jewish person until I was 18, and the second not until sometime in my 20s.  I know very, very little about the Jewish faith.  But, I love all kinds of music, and I especially love personal discoveries of new artists and new music.  So, I checked out Hannah's project.  For a modest contribution to her project I would receive not only "New Jewish Love Songs" but also her previous four CDs.  So, I signed on as a backer. 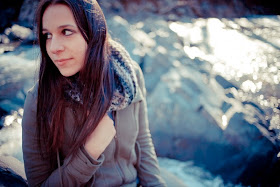 With Hanna Spiro's ("Spiro" rhymes with "hero", by the way) entire musical output at my behest, I set out to learn about Hannah the artist and exactly what "New Jewish Love Songs" were.  And after listening through her albums several times, I want to share with you, my faithful readers, my thoughts about Hannah Spiro and her music.

Hannah's first album is "Last Lights On in Town" from 2006,  In the note Hannah enclosed with the CDs, she called her debut "a folk-poppy look into my fifteen year old mind".  With that in mind, there are a couple immediate observations.  First, all of the songs on the album were written, composed, and arranged by Hannah, and they are pretty darned good, especially in overall musicality.  It's even more impressive to know that they came from a teen.  Second, from the very first song, one is struck by the driving power of Hannah's alto vocals.  She sings with a purpose and a passion.  As I was listening through, I kept thinking "Natalie Merchant".  (After actually listening to Natalie Merchant yesterday, there's not as much similarity as I thought in timbre and phrasing, but Natalie's energy is there in Hannah's performance).  Teen Hannah had a definite sweet spot in her range, and didn't explore the upper and lower registers as much as in later albums, but her singing was fine all around. 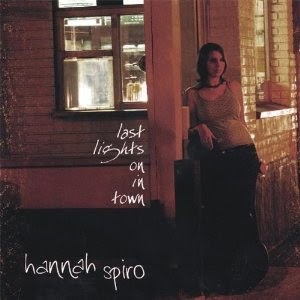 Highlights of the album were the title track "Last Lights On in Town", a very well-written song with a killer hook "Make me feel like tonight every day"; the closer "Playing Outside", a softer piece, very melodic and more acoustic; "The Peace Song", about sex and death and guns and politics and perspective and holy cow this is quite a powerful song about heavy stuff from a teenager; and "Snow", the 4th track, because, well, I love snow.  "Last Lights On in Town" is an impressive debut. 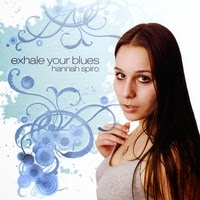 "Exhale Your Blues" was Hannah's next album, from 2009, that she wrote when she was finishing high school.  As with her debut, Hannah wrote, composed, and arranged all the songs.  There is definite growth as a musician throughout "Exhale Your Blues".  Hannah's songwriting skills have matured, the arrangements seem crisper yet more natural, and Hannah explores more in style and musical spectrum.  One of my favorite songs on this album, "Every Molecule" starts with a rap style, then settles into more of a pop structure.  And who can resist the lyric "You're the wasabi on my sushi, more than spicy enough"?  "Strange/Beautiful" is a lighter arrangement to a very personal relationship song, with the great line "Five long years, and you are still the only one who makes me realize/the grass is strange but it is beautiful right here, so screw the other side".  "Grinning at the Trees" and "Closer to the Sun" are two other of my favorites from "Exhale Your Blues". 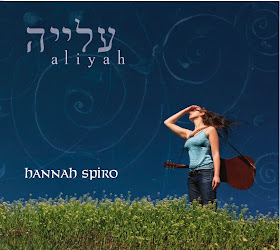 Hannah's next album, "Aliyah", marked a significant change in direction, as she recorded an album solely of Jewish music - Jewish stories and prayers interpreted with her ever-growing skill as a song writer.  The album begins with "Wherever You Go", a very strong opening song which highlights Hannah's songwriting.  According to the liner notes, "Wherever You Go" is written from the point of view of Ruth, from the Book of Ruth, and is about the bond that two people can share from caring and love.   Track 2, "Lecha Dodi", is the first of several songs on the album to include traditional Hebrew verse, all of which sound incredible.  "Golem", the fifth song on the album, is a favorite of mine, relating the traditional Jewish story of the Golem, "a monster that a rabbi created one day to protect his town from enemies" (from the liner notes).  "Aliyah" bursts with passion for Jewish tradition and faith. 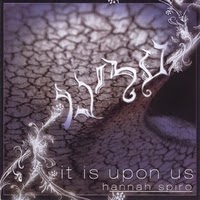 Next in Hannah Spiro's discography is "It Is Upon Us", from 2012.  It is an album of original Jewish liturgy.  It builds upon the foundation that began with "Aliyah" - great musical performance, abounding passion for faith, and vocals perfectly suited for the songs.  Many of the songs on "It Is Upon Us" have Hebrew lyrics that completely embrace and enlighten the spirit of the album.  Hannah's personal connection with the songs is evident throughout the record, with "Mah Gadlu" (based on Psalm 92), "Mi Chamocha" (based on Exodus 15"), "I Am Not Afraid" (based on Psalm 46) being highlights. 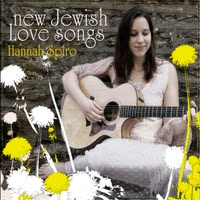 And that brings us finally to Hannah's new album "New Jewish Love Songs".  In her Kickstarter video, Hannah implied that the songs may not be 'love songs' as we typically think about them.  And this is true.  "New Jewish Love Songs" is an album of songs filled with love of God, faith, tradition, family, liturgy, and spirituality.   Hannah has blended traditional liturgy with English lyrics to give us an amazing record.  The album begins with "Return to Eden", an interpretation of Adam and Chava from Genesis 2, which Hannah calls "the ultimate Jewish love story".  The album continues with "Oseh Shalom", a traditional prayer of peace, and "Zot Ot Habrit (Covenant of Genesis)", and six other songs.  I was particularly moved by "Elohai N'tzor", about the temptations of gossip and the use of language to do harm, and the quest for strength to overcome.   And, "Gather You Together" has kind of a foot-stompin' beat accompanying the story of the Covenent of Second Isiah.  "New Jewish Love Songs" is an incredible record.

I want to point out the liner notes in Hannah's last three records, her albums of Jewish music.  Her notes for each song explain the inspiration, the relationship to Jewish liturgy, and Hannah's own thoughts about the song and her interpretation of meaning.  They are quite honestly the best liner notes I have ever read, and serve as a means to complete the musical message.  Especially for me, one with little knowledge about Judaism, the notes are an essential addition to the music.

So, to finally wrap up this very long post, I have to say that I have never been more pleased to have backed a Kickstarter project.  Hannah Spiro's music, especially her last three albums of Jewish music, was a completely new musical experience for me.  Her liner notes also gave me a wonderful glimpse into the Jewish faith.  Hannah's records are marvelous.

You can find out more about Hannah Spiro at her website, www.hannahspiro.com, and her CDs are available through CD Baby.