A Sharing We Will Go: Christmas in Slovenia

It's been a busy weekend folks.

Yep - it's here, the first share of the year.  But first a little backstory.  Late last year, Jo Ann Lipovac, spouse since 1961 of Don Lipovac, The Polka King of Kansas City, passed away, Don having passed a year earlier.  This past Summer, an estate sale was held, including the Lipovac's vast collection of musical instruments, sheet music, and records and CDs.  If you wanted an accordion of your very own, this was the place to get one.  Accordions, mandolins, and other instruments that Don used in his many, many years of performing in the Kansas City area, as well as nationwide.  The Polka King had quite a following.  What caught my attention in the estate sale ad was the "massive record collection".  So, I headed out to the sale.

The collection was indeed massive, at least a thousand records, maybe a couple thousand.  It was a varied collection, though most of it was what you could call Eastern European folk music.  Lots and lots of polka records, as you would imagine, and many more from that part of the world.  I saw a couple interesting things - an album cover autographed and personalized to Don from Frankie Yankovic (no record in it though, or it would be mine now), and a recording of Don himself performing on the Lawrence Welk show.  Oh!  And a CD autographed by Charo!  (It now graces my collection!

I came away with 20 or so Christmas records, and they are serving as this year's shares.  It's not all Eastern European, as you'll see in the coming weeks, but quite a bit is.  Fascinating music, and most of the records were in great condition.

RIP Polka King, and thank you for the great music,

To kick off sharing season is "Christmas in Slovenia" 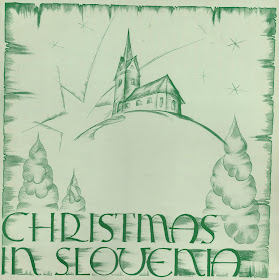 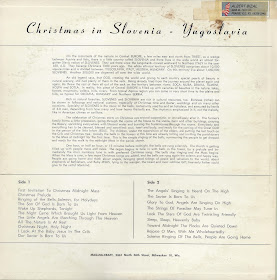 If I recall correctly from when I transferred this to digital, this is a recording of a Christmas Eve/Christmas service in Slovenia, as the track names would indicate.  It's a glimpse into the spiritual celebration from years ago.