Album Release and Artist Interview: Phoebe Gildea and Noah Brenner "All is Bright"

Friday, December 2 marks the official release date for the debut Christmas album by soprano Phoebe Gildea and harper and baritone Noah Brenner, "All is Bright".  Thanks to their Kickstarter campaign, mine arrived in the mail today, a few days early, and I'm thrilled to share a few thoughts about the album, as well as an interview with Phoebe and Noah. 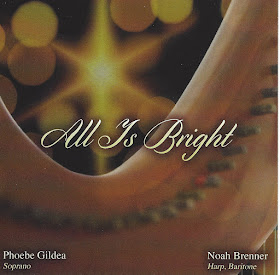 I'm listening to the album for the first time as I'm writing this post, and I couldn't be more thrilled.  The quality of the recording is excellent and flawless, and Phoebe and Noah produce a rich, full, vibrant sound.  The 12 songs on the album are mostly familiar Christmas carols, beginning with "I Saw Three Ships", including "What Child Is This?" and "Carol of the Bells", and concluding with "Cantique de Noel".

There are two standouts in the track list: "Gaudete" and "Walking in the Air".  Renowned Christmas music authority Tim Neely included a version of "Gaudete" as a Christmas Song of the Day selection last year.  The song dates to 1582 as the earliest known publication.  Phoebe and Noah's vocal duet rendition is truly marvelous - I've never heard a better version.  The second attention grabber is "Walking in the Air", written by Howard Blake and popularized by Aled Jones as featured in the animated short film "The Snowman".  It's a perfect performance piece for Phoebe and Noah, and is beautifully done. 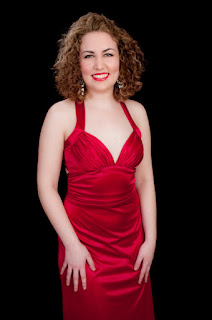 Noah and Phoebe took time out of their busy schedules for a fantastic interview.  You'll see that these two, in addition to being pretty darned awesome and dedicated musicians, are a couple of friendly, fun-loving folks.  I really enjoyed connecting with them for this little Q&A.  After the interview,  please see the links at the bottom for more information about Noah and Phoebe, as well as a purchase link for the album.  I know that most of you probably don't have an album of Christmas music by a classical soprano and a celtic harper, but believe me, you will want to add this one to your collection.

Merry & Bright: Phoebe and Noah, thank you for spending some time to answer a few questions here at Merry and Bright!

Phoebe Gildea: We’re happy to talk with you.

Noah Brenner: Thanks for inviting us! 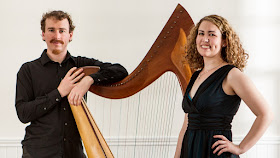 MB: First, please tell us a bit about your musical partnership.

PG: Noah and I have been friends for years. We met tango dancing, and we only realized later that we are both musicians. He also happens to be my best friend’s partner, so we see each other all the time. I’ve admired Noah as a musician pretty much since the first time I heard him play, and I was thrilled when we decided to work together on this project. We have very different career paths – I’m much more in the classical tradition with opera and concert repertoire, and Noah is…less definable.

NB: (I play very old things and brand new things, but not much in the middle.)

PG: But at the same time we share a very similar philosophy about music. In working on this project, we really enjoyed exploring the historical context of the music and words. Since we both went to music school, we are familiar with music theory and history. That means we know how to break the rules, and it was important to us to break them intentionally. Now that we’re approaching our live performances, we’re finding that we also have a similar approach to connecting with the audience and making the music accessible.

NB: Beyond music, it’s been great to combine our two skill-sets to get through everything we needed to do before this album could exist. Phoebe is really good with organization, coordination, and advertising. I’ve been doing a lot of the musical arranging, and, since I’ve made several albums previously, I brought that knowledge to the process. Of course we still had some surprises, but there were fewer than last time, and there were two of us to deal with them. So that was nice.

MB: You chose Kickstarter to help fund your Christmas album. What was the crowdfunding experience like for you?

NB: It worked well for us. For my last album, I used Indiegogo’s flexible funding scheme. Kickstarter uses an “all or nothing” model, which was more stressful, but also more effective. People who were supporting us knew that they really had to get us to our goal or the project wouldn’t happen. Kickstarter is built more for a single organizer, so we had to work out how the two of us could run it together, since we don’t have a “leader,” but overall it was a great experience. We also got some backers who we didn’t even know (like you!), which didn’t happen for me on Indiegogo.

PG: We knew going in that it would be really stressful (What if we didn’t make our goal?!) -- and it was -- but it was also validating. People gave us money and spread the word about our campaign because they wanted to hear and support our music. Conceptually, I had confidence from the beginning because I trusted my marketing skills and I knew that our project was worthwhile, but there was another layer of emotional satisfaction when it went so well. We made it to 150%! (And that’s not even counting the donations we got outside of Kickstarter.) It’s good to make music knowing that people want to hear it. 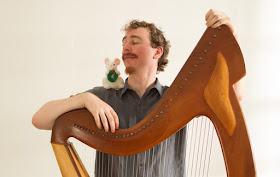 MB: As a backer of your Kickstarter campaign myself, I got an early preview of some songs from you, and I’m very excited to receive the finished album! The song list includes several well-known Christmas standards as well as some that are recorded less frequently, such as “Gaudete” and Aled Jones’ wonderfully surreal “Walking in the Air”. How did you select the songs for the album?

PG: We made a list of all the songs we could think of, then we went through and drew smiley faces by our favorites, then we waited for a muse.

NB: There were some that we knew from the beginning that we wanted to do. Those less recorded songs that you mentioned were actually some of the first on our list. I think “Walking in the Air” was the very first. The rest of them came together as inspiration struck. There were some that one or the other of us really liked, but that didn’t work on the other’s instrument. Some of the ones we ended up using surprised us.

PG: Yeah, I did not think “It Came Upon the Midnight Clear” was going to make it onto the album. Noah had never even heard it before, and it was pretty low on our list. Then during one rehearsal we were really tired and didn’t want to do detail work on any of the ones that were already in progress, and I opened my childhood Christmas carol book randomly and started humming “It Came Upon the Midnight Clear.” All of a sudden Noah was writing these gorgeous arpeggios and I found really cool verses in one of the older books that we had. Now it’s my favorite arrangement on the album.

NB: We mostly chose old pieces, and even the ones that aren’t old sound old. That fits my style pretty well (which I’m sure is a coincidence, since I did most of the arranging).

NB: (Never!) Probably the most modern one was “Walking in the Air,” and then we go all the way back to “Gaudete,” which is from the sixteenth century. The melody of “O Come, O Come, Emmanuel” is even older than that. 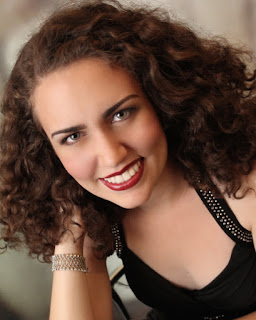 MB: What do you hope your listeners experience when they play your Christmas album for the first time?

PG: I hope that everyone, no matter what their relationship is with Christmas, and whether or not they have any religious associations with this time of year, can find some peace, joy, comfort, and reasons to celebrate. Christmas can be really stressful, and I want people to be able to listen to our music and remember those childhood feelings of excitement, or to find some new reasons for joy.

NB: I hope we take them to some of the worlds that we created. They might not know what stories were in our heads, but maybe they can make their own.

MB: I keep referring to “your Christmas album”, as I haven’t seen an album title yet on your website. Can we get a Merry and Bright exclusive announcement here with the title of the album?

PG: Oh yes, choosing the title was a real challenge. Between making it fit with the music, the cover art, and both of us, we only really decided in the final stages of the ordering process. We had even started graphic design before we were 100% settled on a title. Okay, I’ve made you wait long enough.

MB: What was your inspiration to make a Christmas album? Has Christmas music been a part of your life since childhood?

NB: It has, but in a different way. Since I’m Jewish, it wasn’t part of my tradition in that sense. But as a musician it has been part of my life for a long time. I enjoy a lot of the music, and I especially like caroling because I get to sing a cappella. 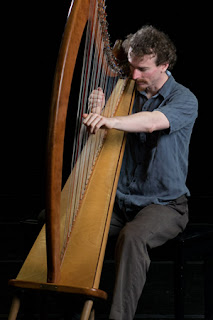 MB: Phoebe, on your website you’ve written that you have recently focused your professional life 100% on making music, giving up the proverbial ‘day job’. We here at Merry and Bright wish you complete success! What gave you the confidence and courage to make that decision?

PG: Thank you! I was finally too busy to keep doing both. There was a decisive moment when I thought I would have to turn down a paying opera gig with a great company because I didn’t have time to fit it into my work schedule, and that just didn’t feel right. While I loved many aspects of the office I worked in, and I’m grateful for the skills I learned there, it was never meant to prevent me from taking a music job I really wanted. I examined my life, I made a lot of color-coded lists, and I did the math on my anticipated music income. In the end, though, it came down to a leap of faith. Organizing and planning certainly helped me be confident in the knowledge that I had the means to at least survive. The courage to make a big life change comes in part from years of training myself to deal with performance anxiety. I’ve come to the conclusion that (on stage and in life) “ready” doesn’t mean everything is perfectly in place with no problems, but that you are ready to deal with the uncertainty, give it your all no matter what, and keep trusting yourself and your art.

MB: The lucky folks around the Eugene, Oregon vicinity get the opportunity to hear you two perform songs from your album this season. Do you see Christmastime performances becoming an annual event for you?

NB: Sure! Maybe not quite as much as this year, since we’re doing an album debut tour all over the Pacific Northwest. We put a lot of time into booking gigs to advertise our album, and we probably won’t do that to the same extent every year.

MB: Well, I am truly excited to hear your finished album and add it to my collection. Thank you again for your time. Have a very Merry Christmas!

PG: Thank you for reaching out to us and supporting our album!

NB: We hope you enjoy the music!

"All is Bright" ordering information
Der Bingle at 5:00 PM
Share