For my last post about Planet Comicon 2017, I want to feature "Black Buttons Vol. I", a collection of macabre stories by midwest writers, and Magnificent Cowlick Media, publisher of the anthology.

Mark Groves is the owner, writer, and pretty much doer of everything for Magnificent Cowlick Media. Included in his list of jobs is one-who-mans-the-table at Comicon.  I visited his table and chatted with Mark at length about the books his publishing company has to offer.  Mark is very energetic, friendly, talkative, and is passionately proud of the books he has published.  Mark is a contributing writer to his anthologies, but talks about the other authors' contributions more than his own.  Mark clearly loves this writing and publishing business, and effusively supports his collaborating writers. 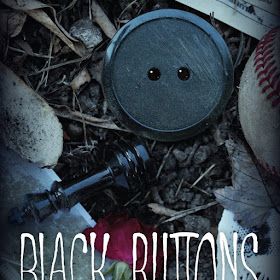 I picked up a copy of "Black Buttons Vol. 1", a collection of stories set in and around the Kansas City area. The setting makes reading it a little more special for area residents, but won't damper the experience for others.  The stories range from just a few pages to longer, near-novella length explorations of darkness.  Some favorites:

"Harry" by J.E. Peterson - you could call this "The Sandlot Gone Evil"
"Pray for Rain" by Mark Groves - a deeply complex tale of second sight set in Kansas City,
"A Stake in the Heart" by Andrew Rambo - ok, based on the title you can probably guess it's a vampire story, but it's one of the funniest vampire stories I've ever read
"Checkmate" by Mark Groves - superbly paced, excellently executed story of revenge gone wrong
"Bring May Flowers" by Marissa Pelot.  Mark Groves calls this the best story in the book, one of a young girl's internal struggles and resolution.

What about the title, "Black Buttons"?  Well, as Mark explains in the forward, the title comes from a rural Missouri legend about cursed persons or families.  If you were cursed and you left a black button on the road, when someone else picked it up, the curse was transitioned to them.

Do pick up "Black Buttons" from Magnificent Cowlick Media, but don't pick up any black buttons you see lying on the road....