Just a few days left until Christmas, and a few shares left for this season.  Tonight, complementing the organ music I've shared out already, is Christmas Chimes: New High Fidelity Recordings on Organ and Church Chimes of the Most Popular Christmas Carols...Featuring Leslie Carter.  Whew!  What a title!  Actually, it's probably just Christmas Chimes, but I have to fill up space in the post somehow. 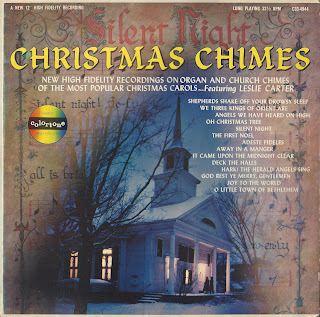 Christmas Chimes features 14 tracks, 13 of which are well known carols, with the 14th being "Shepherds Shake Off Your Drowsy Sleep", a song I don't recall encountering over these several years of blogging.  The modern version might be titled "Shepherds Get Your Butts Up and At 'Em", but fortunately it's the traditional version (and fortunately I'm not trying to make a living as a song writer).  Actually, this traditional version isn't too rousing, for sure.  I'd include some trumpet blasts to get them shepherds up, but que sera sera.
Pretty good album.  Colortone label.  "Finest High Fidelity".  Clean rip, pretty good sound.  I think you'll enjoy this one.
download link
Der Bingle at 3:08 PM
Share