Maiah Wynne is truly a rising star in today's music universe.  Hailing from the northwest (currently residing in the Portland, OR area), Maiah has a hauntingly beautiful voice, is a multi-instrumentalist (often concurrently - more on that later), and is an accomplished songwriter, winning the International Music from the Moon songwriting contest with the amazing "Show the World", the Claim to Fame International Song Contest, and the Burl Audio Covid19 Songwriting Contest.  Oh, and Maiah has been featured on NPR's All Songs Considered.

In the early 2020s, Maiah caught the attention of Andy Curran with her original compositions.  Andy called Maiah and told her he'd sent her songs to his friend Alex, who really liked them.  Maiah thought "ok, cool".  Then she realized that Andy's 'friend Alex' was Alex Lifeson, guitarist for Rush and Rock and Roll Hall of Famer.  Fast forward to 2022, where Maiah, Alex, Andy, and Alfio Annabalini formed the band "Envy of None" and released their debut self-titled album. 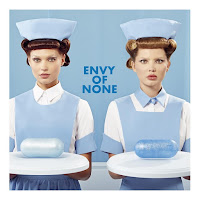 So, what's this got to do with Christmas music?  Well, Maiah has a 3-song EP available on Bandcamp, titled "Christmas with Friends".  On it, Maiah performs her original "Feels Like Christmas" and covers "Emmanuel" and "Winter Wonderland".  "Feels Like Christmas" is a wonderful song, composed during a long drive across the upper midwest in the wintertime, reminiscing while anticipating the nearing Christmas season. 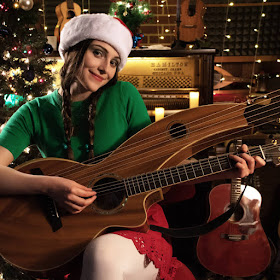 And, the story gets better...

In early October of this year, Maiah, her six stringed instruments, her bass and snare (which she plays with her feet), her percussionist/sound man Troy and her manager/driver/merch dealer/etc Heidi made a stop at my house and played a show in my living room for an intimate gathering of my family and friends.  Her show was astounding.  Maiah played many of her own extraordinary compositions, as well as amazing covers - Radiohead's "Creep" (which was eerie and ethereal), a Metallica song on the banjo, a Norah Jones song, and songs from The Hunger Games.

And, of course, by request (by me), Maiah played "Feels Like Christmas", live, in my living room.  My good friend Devin recorded this song, and it's embedded below for your viewing and listening pleasure.

Maiah has an Alex Lifeson signature Les Paul model guitar that she played during the concert, that Alex had personally given to her while they were recording Envy of None's album.  After the show, I actually got to hold the Alex Lifeson guitar!  What a thrill!

Please check out Maiah Wynne on her website, and her music is on Bandcamp.  And keep your eyes and ears open for more from this truly incredible musician.