There are days when being a Christmas music blogger is really, really worth it.  The day I received an e-mail about a new song, "Winter's Wish", from Carol Crittenden, was one of those days.  The season is still young, but I know that "Winter's Wish" is one of the best songs of the year.

Carol Crittenden is an east coast (New York/New Jersey area) singer-songwriter-guitarist with well over a decade of music performance under her belt. Carol was the lead singer for Four Celtic Voices, appeared in touring stage productions of Dracula and Hamlet, as well as other stage productions in the NYC and LA theatre markets.  As a solo recording artist, Carol has released an album, En Route, and a pair of singles, "RISE" and "I Won't Break". "Winter's Wish", set to officially release on Nov 18, 2022, is absolutely beautiful.  It's about the magic of the Christmas holiday season from a child's point of view, and how our experiences with the season change as we grow older.  We reminisce, we remember the joy of Winter and Christmas, and we long to have just a touch of that childhood wonderment back.  And, for so many, we can and do recapture some of those feelings when each new Winter season comes.

The years keep on passing, the drummer boy drums

But we all become children when this time of year comes 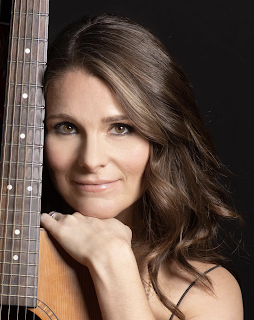 One cannot write a Christmas song without Christmas imagery, but so many new songs are trope-heavy, pushing every Christmas phrase and symbol (either spiritual or secular, take your pick) possible into the lyrics.  With "Winter's Wish", Carol has evoked all the goodness of the season with just a few sublime lyrical portraits, my favorite being:

Grandma’s spritz cookies are the best that he knows

Is it butter or magic she puts in the dough

<sigh>  I completely love this song.